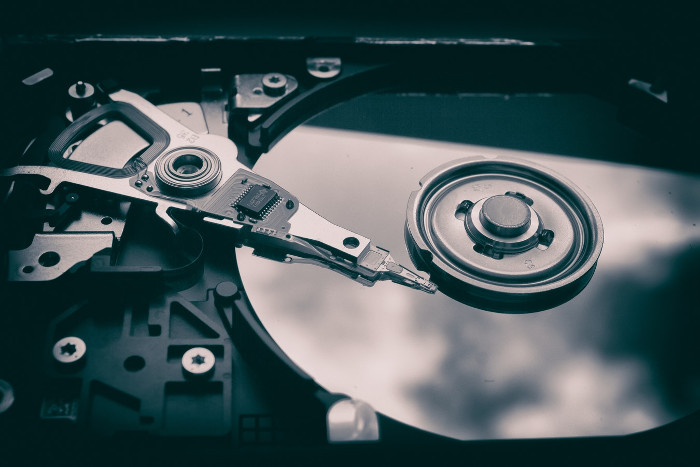 Well, at this moment we cannot deny that containerization is a basic pillar of our project work: the ability to compartmentalize the technological stack of each project is a fundamental resource (and be wary of those who do not practice it). But the point is that I have a new toy to play with it. Let me explain: I always (or almost always) had worked on Drupal projects with the same stack of versions, so I only had one environment set up. Then, I started to have different versions (Drupal 6.x, Drupal 7 … 8) at the same time for diverse projects and then I started playing with Docker. But now I have discovered ddev and a new game has started.

I was reading in somewhere that there’s two main kinds of developers: Those who works with a simple and unique stack locally (It requires a main environment with changes per project), and those who work with an encapsulated environment per each project, and it requires the use of tools for virtualization or containerization (and add another layer of complexity).

Today I wanna talk about the second option: developers with a isolated environment per project, what kind of tools we can use for it and, of course, the role that DDEV has been ocupied in my life (and in my heart). But for this travel to the tool DDEV, we need remember (I’m sure you know about it) some previous concepts.

Originally, the problem was: How to host various applications with different versions or diverse stacks in the same single server? and there were three answers:

And the last is the point for us: The Operating System Virtualization, the concept wich Docker is based and by extension DDEV as well. Docker was a kind of OS Virtualization based in LXC (Linux Containers). 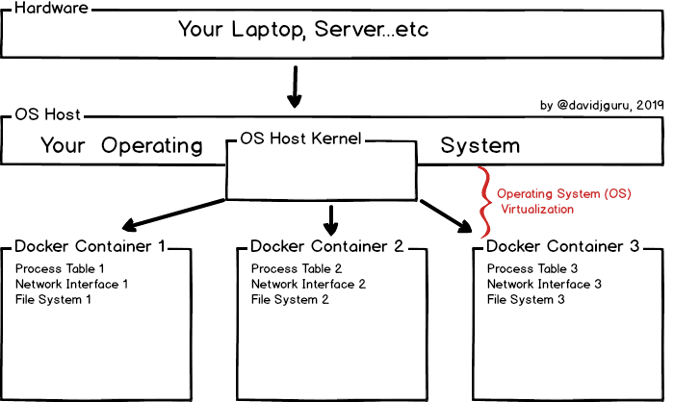 Then, a container (or Docker Container) is a Logical Entity with a copy of the Process Table, the Network Interface and the File System Mount Point, related with the kernel of the OS Host where Docker is running. This is the reason why - unlike in the case of virtualization via hardware where an OS Guest can be different from OS Host - OS-Virtualization must maintain systems that share the same version of the kernel.

We now have a partial deployment performed through the equality 1 Application = 1 Docker container, but now in the next step, we see that a Drupal project = N applications = N Containers. How to relate all this? for that we entered into the use of Docker Compose, a tool to articulate the links and connections of all the Containers that we want to operate in an integrated way within the context of a project.

Now defining the relationships between containers trought Docker Compose we could deploy applications from some containers. 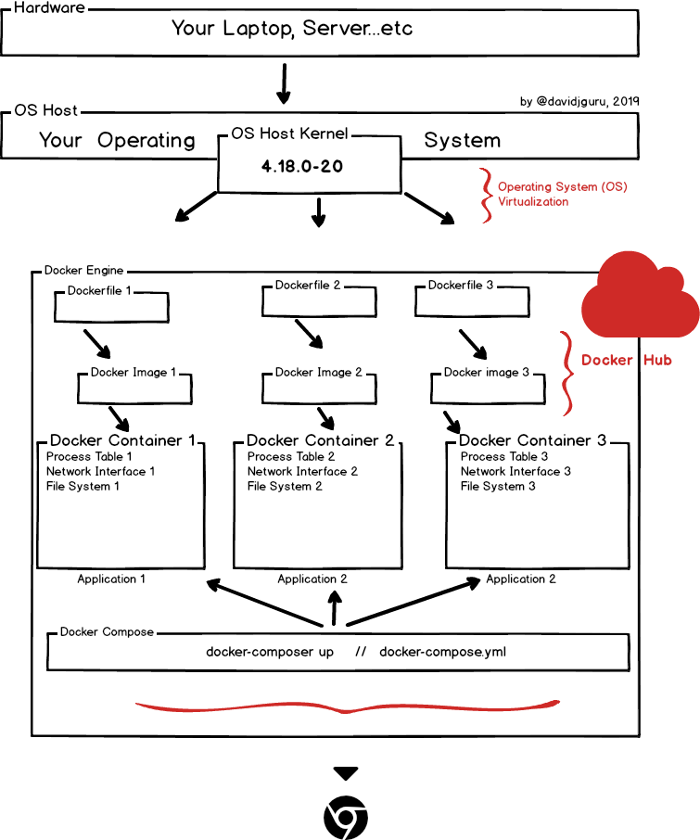 Well, that’s how I was working lately until a good friend of mine (and sensei), Pedro Cambra{:target=”_blank”} from Cambrico{:target=”_blank”}, told me about DDEV and asked me to try it. From there everything for me has been joy :-D

Well, as they explain: Is an open-source, PHP development tool, built upon Docker. It can easliy create local hosting environments, and its server configurations can be version controlled. Originally meant for Drupal development, ddev easily can host Drupal, Wordpress, and GravCMS sites. Since it is based on Docker, ddev is compatible with Windows, Mac, and Linux.

But for me, in my own words and in my bad English, DDEV is something like a pre-cooked solution to assemble Drupal projects and later, keep developing with them. Also release as Open Source Software under Apache License v2 in: https://github.com/drud/ddev{:target=”_blank”} You can see the Documentation here, DDEV Documentation: https://ddev.readthedocs.io/en/stable/{:target=”_blank”}

There are many operational advantages to using DDEV as a tool for building development environments, but I will summarize some of the main ones:

I will explain myself taking as an example my current situation: At the moment, I have a company laptop with Windows 10, loaded with pre-configured corporate applications that I can not delete and that gives me problems when building a boot manager. So I’ve virtualized Ubuntu in virtualbox. In this OS Ubuntu 18.04 I have no resources associated with development…nothing! I don’t have Apache, neither Composer, or Drush, or PHP…nothing…only the Docker Engine system mixed with DDEV. Just This. I have everything isolated in Containers, through DDEV. A DDEV structure (of multiple related containers) for each project.

So let’s see a new iteration on the previous picture to understand what this construction entails for development in a local environment: 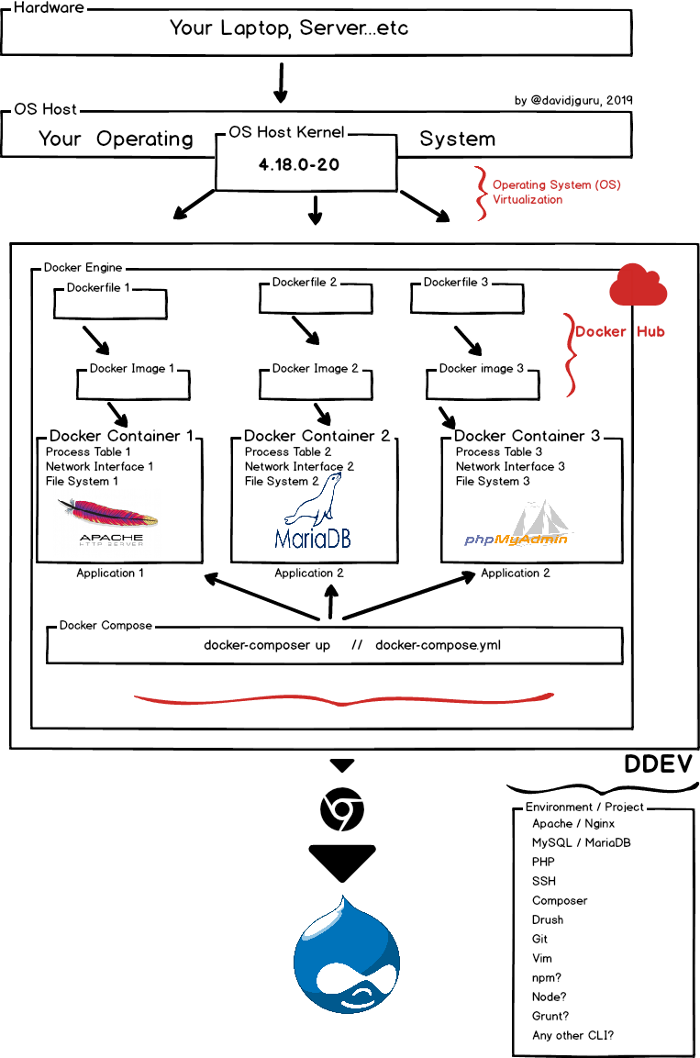 5- Setting up a Drupal 8 Site with DDEV

We are going to try to build a development environment and deploy a project based on Drupal 8 thanks to DDEV. Initially, we will start with OS Ubuntu and evidently, these steps should only be completed completely the first time (installation of Docker and DDEV). The following iterations will be much faster with all the tools already installed and configured. Once you have the tools installed, steps 1, 2, 3, 4 and 5 will not be necessary anymore.

Remember: everything we have seen here in this article is for local development (no production or live).

5.7- Install and enable some basic Drupal Modules for work

5.8- Connect to Container and some commands

What do you think about DDEV and its possibilities? You have to think that many unix commands shown above are totally scrollable to the ddev configuration file like hooks (pre and post formats), but I preferred to make it explicit here as an introduction.

Finally, I add some links of interest for you:

Thinking about putting together some of the various Drupal installation modes, I have created a repository for this. I have called this repository “50 ways to install Drupal”, mainly for teaching purposes. It’s a set of Installers for Drupal, a collection of craft scripts to launch various types of processes installing Drupal codebase. See the repo in gitlab{:target=”_blank”}

I have started by building a script that performs all the steps above plus some additions (such as installing npm, Node, Angular and some more packages). It’s a script to deploy a local development environment in Drupal - Headless projects with an uncoupled frontend and based on Angular. Angular & Drupal & DDEV{:target=”_blank”}

Use: Just for create Debian - based environments to work in Drupal - Headless projects (In this case, using Angular for the frontend). Launch your Terminal (Ctrl + alt + T), go to the folder and launch just: $ . recipe_1_ADD_Angular_Drupal_DDEV